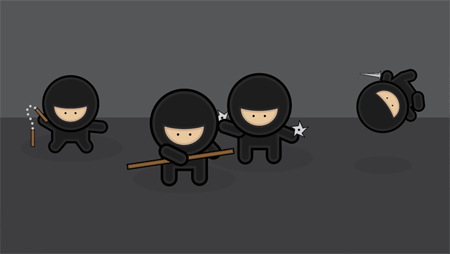 Apparently, this was the only logical explanation for how I came to be standing next to him without him knowing it.

According to Wikipedia, ninjas were covert agents or mercenaries in feudal Japan. Their special talents included espionage, sabotage, infiltration, and assassination. In a quote attributed to historian Kiyoshi Watatani, he states that ninjas were trained so that an opponent “does not know of one’s existence, and for which there was special training.”

Curious for more information, I also checked with MommaPedia and this was her ninja checklist:

– black clothing
– only out at night
– stays in the shadows of darkness
– individualized, special skills
– jumps high, runs fast

Oh…then I was raised to be a ninja, except for the jumping and running fast bit.

I could also be a vampire.

I was trained in these skills: not to cause waves, not to stand out, not to think too highly of myself, and not to burden other people with – well, anything. I took my training to heart. I became very good at being…unnoticeable. And I really believed I could make myself invisible.

People have walked over and stood right in front of me while I’ve been waiting in line. “I didn’t see you!!” is a common exclamation. One time, someone placed themselves directly behind me while I was facing the cashier and paying for my groceries. You don’t have to stand five feet away from me, but I don’t want you spooning me in public, either.

The reality is, I’m often in peoples’ blind spots – I guess even when I’m in front of them. I’m 4’ 11”. Kids, you know what I’m talking about. When I wear heels and stand at the top of a ladder, the view is incredible.

I can see peoples’ bald spots. People can’t see mine. Everyone looks really different from this majestic angle. Then it occurs to me that maybe being short gives others my best angle. hm.

“I don’t want to be a ninja.” I had harumphed at him, thus dashing all of his dreams of having a ninja as a girlfriend. “I’m tired of not being seen.”

And there it was. I hung up my ninja duds and soon after that, the boy was the one who became invisible.

For many years, I had been trying to erase myself, yet I longed to be significant. How in the world was I supposed to be seen if I was trained to please others? Deprogramming. Constant Retraining. Those learned pathways are deeply ingrained.

But I know this: If it’s possible to feel invisible from the inside out, then it’s possible to release that light inside you, too. It’s there, chomping at the bit to get out. And if you’re worried about being a show-off like me, there really is nothing to worry about because if you’re worried about it, you most likely won’t let yourself take a nude selfie and tweet it to the world.

Your playing small does not serve the world. There is nothing enlightened about shrinking so that other people won’t feel insecure around you. We are all meant to shine, as children do…And as we let our own light shine, we unconsciously give other people permission to do the same. As we are liberated from our own fear, our presence automatically liberates others.

And I never thought I would quote Jim Carrey, but here is some profoundness coming from him:

And there it is. Go out there and do Big things, y’all.