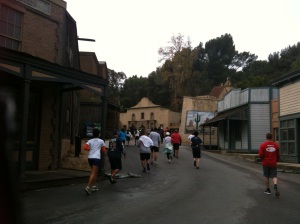 A real 5K through a fake town

I was kind of kidding in my last post about having a runner’s high.  But something happened.  I think it happened to me.

What are the signs?  Slight euphoria?  Feeling like you can run another race even though you’ve just completed one?  Wanting to sign up for a 10K next time?

Adrenalin must have kicked in when the race started, because I never felt the lead in my legs like I usually do during the first five minutes of every run.  I ran slow and steady until I couldn’t anymore…and that’s when I took the photo above.  In my female age group, I finished 4th out of 17 runners.  What the?  I don’t know how many greyhounds were in my group, but this miniature Dachshund did pretty well.  At first, I really thought there might have only been four women running in my age group.  Seventeen women doesn’t seem like a lot compared to other races, but I’ll take what I can get.

I used to be one of those people who didn’t understand running.  Runners, I would scoff.  What the hell do you think you’re doing?  Hello, you’re not heading anywhere…not like me…see?  I’m getting in my car and I will end up at the bakery.  Now that is a real destination!

I was talking to my hair stylist the other day and I told him that I was going to run a 5K on the lot at Universal Studios and that it was going to be fun.  He gave me a Girl, you be crazy look, just like I must have given other people in the past.  Somehow, I crossed over into thinking running was fun.

After the race, my friends and I immediately launched ourselves into the pancake breakfast and enjoyed that feeling of sharing a fun experience together.  What could be better than that?

4 thoughts on “Crossing Over: The Runner’s High”