Did you miss me?

I knew it.  You didn’t even know I was missing, did you.  That is just the reaction my cat would give me when I’d come back from a trip:  “You were gone?”  And then she’d go back to licking herself.

So where was I? 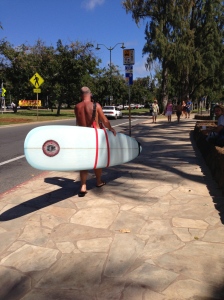 Just another day at the office

The beautiful island of Oahu.  I had a great time visiting friends and eating multiple meals and desserts all throughout the day, every day.  Before I left for the trip, I was feeling vain and didn’t want to wear shorts, but being in Hawaii made me realize that a lot of the native and local women are comfortable with their bodies.  They just owned what they had.  It’s simply too uncomfortable to wear pants all of the time.  I mean, I brought a pair of jeans.  What was I thinking!?  And look ovah dere, yah?  My legs look like the others’!  Sure, there were skinny-legged women there, but I also saw my gene pool represented in the short, strong (well, I’m working towards strong) category.  So I put my shorts on and went native.  Well, until a few days later when I broke out in a hideous heat rash all over my feet, legs and arms.  I eventually covered myself up – I didn’t want to scare people into thinking I had a nasty case of smallpox.

So there I was in Paradise, minding my own heat rash, when I get a text.  From Wine Guy.  If you recall – which I barely do – I last left him a voicemail and got no response.  But WG moves sllllloooowwww…two and a half weeks later slow:  Hi, are you interested in going out to a movie or coffee?  Unless I’m missing something, is this a taste of what dating is like?  You get to know a person by not contacting them or responding to them every few weeks or so?  Call me a sucker, because you will, but I texted him back, told him I was traveling at the moment and asked if he wanted to get together at the end of the month.  Again, no response.  Well, it’s only been ten days, so I expect to hear from him in another week or two or three.

My behavior is indicative of someone who doesn’t have very many choices.  That’s why, despite my better judgment, I’m thinking about online dating.  A few weeks ago, when I was doing my research, I noticed that I could actually look at guys’ profiles.  I like knowing things, so I thought it was super handy to find out if a guy smoked or wanted kids or was crazy athletic.  And because I’m a non-smoking, non-childbearing, half-activewoman/half-slug, information like this is really important.  I didn’t anticipate that the filtering process could be so helpful.  The idea still scares me, but I’m getting closer to trying it out for a few months.

Don’t attempt to figure out who I am.  I won’t give out anymore clues.  You already know too much about me – after all, you’ve seen my right hand and both feet, and I’ve admitted to my Asian heritage and short, stout-leg nature.  You won’t catch me using these profile names:  sugahmama10, dontkrossmi, and ladeeyakuza.  I checked – they’re already taken.  All the good ones are.